You are here: Home>Themes>Buildings and place>Construction>A Construction Worker Under the Pier

A Construction Worker Under the Pier 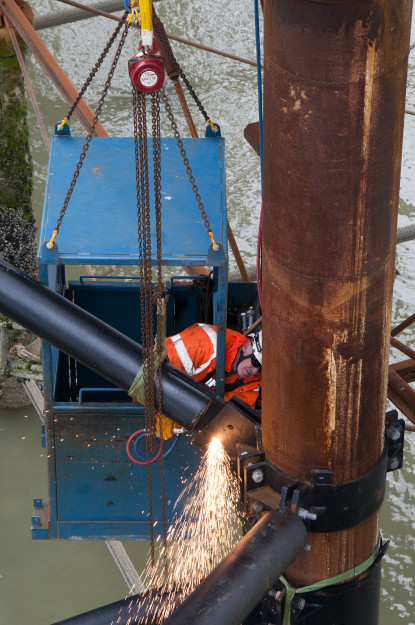 FPE worker fixing a strut to the main structure. He is working from a man basket which is hanging from a crane. Most of the work on the reconstruction has had to be done working from above, at height.

John Cole has photographed the reconstruction of Hastings Pier for two years, from May 2014 until the celebration of its reopening in May 2016. During this time, he has captured the key moments in the Piers reconstruction, including the arrival of the Jack-Up Barge, the demolition of the Ballroom, the laying of the decking and the building of the Visitors Centre. John lives in Hastings, having worked as photojournalist for thirty years in New York, London and now here. John has also completed another body of work for Hastings Pier Charity entitled ’Unsung Heroes’ celebrating the workers who have helped to re built the Pier. Talking of his time photographing Hastings Pier, John said, “It has been a huge privilege and joy to photograph.” www.johncole.co.uk